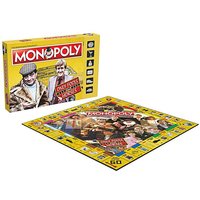 Britain's best-loved sitcom gets a MONOPOLY twist with this edition of Only Fools and Horses Monopoly. Follow in the footsteps of everyone's favourite wheeling-and-dealing family, the Trotters, as you travel around the board moving from series to series. Relive the moments when Del and Rodney offer their services as chandelier cleaners in 'A Touch of Glass', or where Del famously misjudges the bar in 'Yuppy Love' and when the boys attempt to sell bottled water as Peckham Spring Water in 'Mother Nature's Son'. The Trotters have had their fair share of highs and lows and so will you as you trade your way to commercial success or ruin and potentially become Monopoly millionaires! 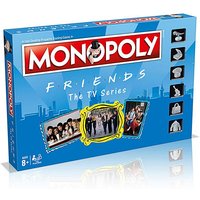 Friends Monopoly. How you doin'? It's time to join the legendary Friends, from one of TV's best-loved sitcoms in the Friends edition of Monopoly. Play as either Ross, Rachel, Phoebe, Monica, Joey or Chandler by choosing one of the exclusive tokens which are iconic to the gang, will it be Rachel's handbag, Ross' dinosaur, Chandler's sweater vest or even Phoebe's acoustic guitar? As you pivot round the board you will discover the best Friends' moments, from the unmistakable Holiday Armadillo, to the hilarious Giant Poking Device and Monica and Chandler's eventful, yet unforgettable wedding! 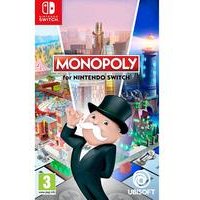 3 different 3D boards are waiting for you! You can now enjoy the game you know and love in a Classic City, an Amusement Park or a Haunted Town. Play anytime, anywhere, thanks to the Nintento Switch, you can now enjoy Monopoly wherever you want! Age 3+ years. 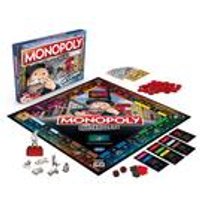 Don't get sad ¦ get even! Say goodbye to the frustration of losing while playing Monopoly, and say hello to the Monopoly For Sore Losers board game. This hilarious twist on Monopoly turns losing on its head and celebrates it instead. For children 8 years and over. 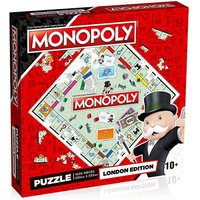 London Monopoly Puzzle. Pay a visit to the iconic and historic city of London in this special Community MONOPOLY jigsaw. Piece together this iconic MONOPOLY game board based on the classic London edition, complete with all your favourite and most memorable spaces from Old Kent Road to Fleet Street, Piccadilly and the legendary Mayfair! Take the time to rediscover this famous MONOPOLY edition whilst putting the pieces together for spaces like King's Cross Station, Water Works and Income Tax. As an extra challenge, the board features an assortment of playing tokens, houses, hotels, cards, money and dice, as well as traditional MONOPOLY game board mainstays like the GO TO JAIL and FREE PARKING spaces, so there's plenty here for novice puzzlers and MONOPOLY lovers alike to enjoy. Take a break from bankrupting your opponents, and work together to complete this fresh, original, high-quality jigsaw instead. 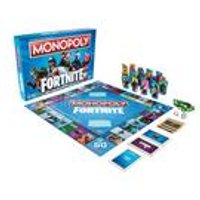 In this thrilling Fortnite edition of the Monopoly game, players claim locations, battle opponents, and avoid the Storm to survive. The gameplay, design, and components of the board game include elements inspired by the video game including Fortnite locations and loot chest cards. 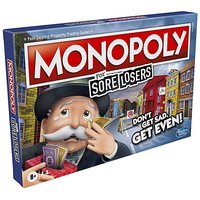 Monopoly For Sore Losers. Don't get sad...get even! Say goodbye to the frustration of losing while playing Monopoly, and say hello to the Monopoly For Sore Losers board game. This hilarious twist on the Monopoly game turns losing on its head and celebrates it instead. Players earn cash by doing the typically frustrating things in the game such as going to Jail, paying rent on a property, or going bankrupt. And those who really start sinking can make a comeback using the large Mr. Monopoly token that gives players advantages over everyone else. So get playing, get the revenge you've been craving, and feel good about losing! Family Game Night might never be the same again with this game. 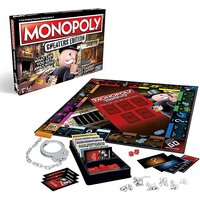 Monopoly Cheaters Edition. Make this wildly different Monopoly game a favourite go-to game for game nights and other fun get-togethers. Lean into those iconic (yet unspoken) Monopoly moments in which rules are bent, money is borrowed, and funny business is welcomed. The outlandish suggestions on the board, cards, and rules encourage players to express their inner cheater to own it all while they buy, sell, dream, and scheme. Fake a die roll, steal some bills from the bank, and even skip out on rent. Complete a cheat to get a reward, but fail a cheat and pay the consequences! No houses in this edition - only hotels - and pretend handcuff unit may leave players chained to the board. 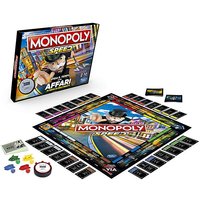 Not a lot of time? No problem! The Monopoly Speed board game can be played in under 10 minutes! Everyone rolls and buys at once so players don't have to wait for their turn. During 4 rounds, players race against the timer to buy, trade and sell properties faster than ever. The timer counts down each buying and trading stage and there's no break between stages. There are even two Go spaces, and players can get out of jail free every time. Monopoly Speed is a great choice for a family game night, parties with friends, and a quick break from the everyday. 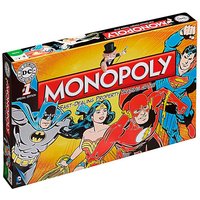 Monopoly - DC Comics Retro. The world of DC Originals is back with its very own edition of Monopoly! Battle your way through the different worlds and conquer LexCorp or Wayne Industries as you tour the board, gathering your selection of heroes and super villains. Team up with your sidekick, and test your mighty skills against the evil forces of Darkseid, Lex Luthor or The Joker. Keep your eyes open, and dodge the attempts to steal your property, for your enemies may be plotting to drive you out of business. Stay sharp and take a look at the Daily Planet, or visit the Rogues Gallery to gather the clues that might lead you to the final victory or a challenging defeat. Triumph over your rivals or go bust trying in this brand new DC Originals edition! Order your limited edition copy of the world's best board game today! 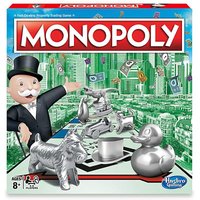 Monopoly Classic. This version of the Monopoly game welcomes the Rubber Ducky, Tyrannosaurus Rex, and Penguin into its family of tokens. Choose your token, place it on GO! and roll the dice to own it all! There can be only one winner in the Monopoly game. Will it be you? The Hasbro Gaming and Monopoly names and logos, the distinctive design of the gameboard, the four corner squares, the Mr. Monopoly name and character, as well as each of the distinctive elements of the board and playing pieces are trademarks of Hasbro. Includes gameboard, 8 Tokens, 28 Title Deed Cards, 16 Chance Cards, 16 Community Chest Cards, 32 Houses, 12 Hotels, 2 Dice, Money Pack and instructions. 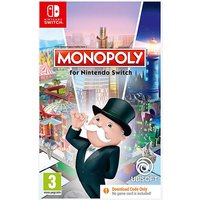 The world's favourite family game brand is coming to Nintendo's new console! Discover brand new lively 3D boards that live and evolve in front of your eyes, as you progress in the game. Unlock exclusive new tokens and many more surprises! Enjoy new ways to play at home, or on the go with up to 6 players! Get the genuine feel of dice rolling in your hands, thanks to HD rumble. Change your strategy with quicker-to-achieve Special Goals that will ensure shorter play sessions. Influence the course of events with Actions Cards, and take over the game! Trading your way to success has never been so fun! 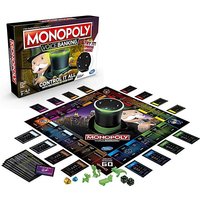 The Monopoly Voice Banking game features lights and sounds, and comes with an interactive Mr. Monopoly banking unit. The iconic Monopoly top hat is voice-activated and the personality of Mr. Monopoly really shines as he handles all of the transactions. He keeps tabs on players' money and properties so there's no cash or cards to think about. Talk to Mr. Monopoly and he responds. For instance, press your token's button and say, Buy St. James Place. Mr. Monopoly will track the transaction, keeping the game moving. With the Monopoly Voice game, players travel around the board aiming to be the person with the most money and highest property value to win! 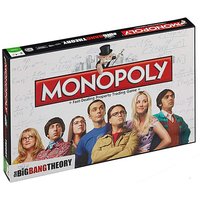 Monopoly - The Big Bang Theory. Cruise your way around sunny Pasadena as you work your way around the board in The Big Bang Theory Monopoly. Choose one of seven collectable tokens, including Leonard's Glasses, and go for broke as you negotiate key locations like the Physics Department Cafeteria and Mrs Wolowitz's house! Building colliders and super colliders. Order your limited edition copy of the World's best board game today! 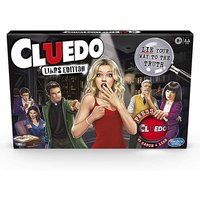 Cluedo Liars Edition. Sometimes you have to lie to get to the truth in the Cluedo Liars Edition board game in which players use Investigation cards (there are 6 Lie cards and 6 Truth cards) to help them figure out who killed Dr. Black in the mansion. Players pick a card and read it out loud, trying to play it cool and convince other players that they're telling the truth ...even if they're not. If a player suspects they're lying they can call that player out by hitting the Liar Button. Were they caught lying or were they telling the truth? Either way, an Evidence card is revealed and players move one step closer to cracking the case. When a player is ready to make an accusation, they secretly look at the cards placed inside the case file envelope to reveal Who, What, and Where. A correct accusation wins the game!

© Price-Wizard 2021 (AZ). No material on this website may be reproduced without prior permission.